This is where you can talk to us and your fellow users about issues you're having with .. Get advice on how to solve issues, communicate things to us and help us make . better!

Forum rules
1. BEFORE REPORTING A BUG, USE THE SEARCH .!!!
Is someone reported it already, don't open a new thread! Save us time so we can invest this time in fixing this bug!
(Unless the report is very old and talks about an older .. Please don't post on old threads).

2. ANSWER THAT FOLLOWING (THE ONES THAT ARE APPLICABLE) . IN YOUR POST:
- What . # of PT are you using? On what device? What OS . is it running? ie. win 7
- Is this bug happening on everything you try to watch? Movies and TV shows?
- Can you attach a screen shot? (If it's something that can be captured).
- Is your internet . stable?
- Did you try to run . as an Administrator?
- Did you try this on another device?
- Did you try this on another internet .?
- Did you try it on wifi and cable?
**The . are just for guidance, no need to answer all of them if not applicable, but the more detail you give us regarding this issue you're having, the easier it'll be for us to reproduce it and fix it! So start spilling...
3. If the issue you're experiencing is on desktop, report it on the "everything desktop" sub-forum. If the issue you're experiencing is on mobile, please report it on the "everything mobile" sub-forum.
Post Reply
3 posts • Page 1 of 1

Hey there team, i came here to report a bug that has been bothering me lately so here i go straight to it...

First i have to m.e.n.t.i.o.n that this issue only appears when i download tv show episodes (*...*), then the bug goes like this: for unknown reason an episode that has already finished downloading starts downloading again when i download a new one.
It kind of erases the downloaded one and replaces it with the ongoing download, both of the downloads happening simultaneously.

For an example see the following screenshoot 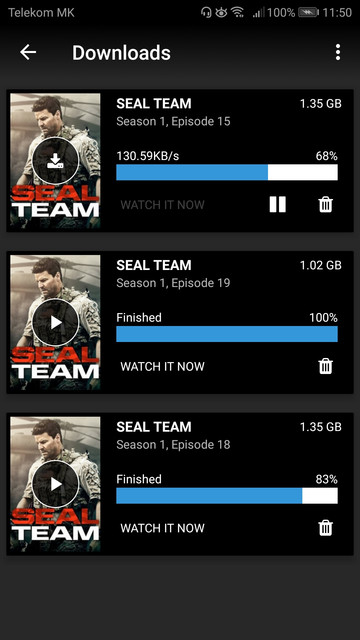 So how does it come for something like this to happen?
It usually happens when you restart the app while having an ongoing download.
When the app starts again it has to check which episode is already downloaded and which not, and if you have more than 3 episodes finished downloading and an ongoing download, chances are that the ongoing download will affect one of the finished downloads.
Why would you restart the app?
Because the app sometimes confuses the subtitles (puts the subtitle of the movie that you have just finished watching to the movie that you have just started watching) and restarting the app after each episode ends (before I start another one) is the temporary s.o.l.u.t.i.o.n i use until this bug is fixed. But now trying to avoid the subtitle bug, i run into another worse one so my temporary s.o.l.u.t.i.o.n is not working anymore.


(*maybe it is happening only on tv shows because i download a new episode while watching a previ.ously downloaded one and i believe that i have never done such a thing while watching movies*)

P. S. As an extra bug report know that this forum converts the words m.e.n.t.i.o.n and s.o.l.u.t.i.o.n into a dot when written without dots between the letters (the only thing in common is 't.i.o.n') the word v.e.r.s.i.o.n also converts into a dot which transforms the 't.i.o.n' into 'i.o.n' but it also converts P.o.p.c.o.r.n T.i.m.e into a dot whichs confuses me and makes me think that you have censored this words which also doesn't make any sense but anyway, it is none of my business.
W.i.f.i. o.r also converts into a dot which helps the 'i.o.n' to become only 'i.o', this is comfirmed by separating previ.ously with a single dot. Eureka!
And the cookie timeout is too short, if i haven't saved this report on clipboard before i hit preview, then i wouldn't spend another 30 minutes re writing it, for sure. It logs me out even on a few minutes edit... Anyway, thank you for developing this app at first place, i hope you fix this soon.

I don't know if this is important, but i forgot to menti.on that when i say i restart the app, i really do restart it.
I close the app, i go to recents (apps running in background), i close it from there and then i force stop it from settings/apps before starting it again.
This might mean nothing, but yet it may also mean everything so here is an update on it... just in case
Top

First of all you are goddamn right about converting words to dot!
As for the forced re-downloading of the finished episodes - I believe its relates for tv series only. When TV sow is fresh/new each episode has separate torrent and everything is ok. However, by the time seasons get older and it is hard to maintain them so they episodes of whole the season has been put into one single torrent with many video files (for each episode). So when you downloading some of the episodes PT probably restarted that single torrent file for the whole season and episodes downloaded before are also affected.
Top
Post Reply
3 posts • Page 1 of 1